The Kids Corona platform, launched by the SJD Barcelona Children's Hospital in April, continues to provide answers to better understand the incidence, impact and transmission capacity of COVID-19 in children and pregnant women.

After publishing the preliminary results on the propensity of children to be infected and symptoms experienced by the paediatric population last June, it is now in a position to provide data on their ability to transmit the disease.

To answer this question, the SJD Barcelona Children's Hospital conducted a five-week research study in 22 summer camps in the Barcelona area, systematically collecting samples from 1,905 participants who have taken part in activities in a school-like environment.

In addition, other cohabiting groups from other camps in which one of the children or the monitor had been diagnosed with COVID-19 were also studied, reaching more than 2,000 study participants.

This is one of the largest studies to have been carried out worldwide to answer the question: how do children transmit the SARS-CoV-2 Coronavirus to other minors or to adults?

The initiative was funded by substantial private donations, required the deployment of a team of more than 60 professionals and was designed and monitored by several national and international experts, including the BIOCOMSC [Computational Biology and Complex Systems] of the Polytechnic University of Catalonia (UPC), the Barcelona Institute for Global Health (ISGlobal) and the Centre for Genomic Regulation.

In addition, it was conducted in coordination with the Department of Health of the Government of Catalonia (Spain), following its line of action regarding COVID-19 and children.

Over the five weeks, the research project identified a total of 39 index cases (new onset): 30 children and 9 monitors. The 30 paediatric cases came into contact with 253 children during the camps (belonging to their bubble groups), 12 of which (4.7%) were infected (secondary positives), which represents a local reproduction number (R) of 0.3. This rate is almost six times lower than that of the general population at the time of the study (1.7 to 2) in the areas where the camps were held, measured by the reproduction number (R).

Most of the paediatric index cases (22) detected did not transmit any infection in the camps. Five index cases transmitted the infection to one contact, two to two contacts and one to three contacts.

Regarding the ages of the children analysed, it should be stressed that, in this study, the younger children (under 12 years of age) were found to have the same propensity to transmit the disease as the older children (13 to 17 years).

Effectiveness of bubble groups to contain the transmission of COVID-19

According to Iolanda Jordan, the study's principal investigator, "The distribution of boys and girls into bubble groups, as was the case in the summer camps, has been shown to be an effective way of containing the transmission of the infection, facilitating the traceability of contacts and allowing selective quarantine", who added that "This does not preclude a system with larger groups from functioning properly".

She also highlights that washing one's hands correctly, five or more times a day, has been associated with a decrease in disease transmission.

Finally, the study shows that there is a high correlation between the incidence of infection in the general population and the number of index cases detected in centres in the same area, which suggests that participants in summer activities have not been great transmitters of the disease and that proactive screening in high incidence areas can be very effective.

Regarding the tests performed on the participants in these camps, it is important to recognise that the saliva-based PCR tests are reliable and more broadly accepted than the nasopharyngeal tests.

This is especially relevant for people who need to be tested often, and particularly for children.

According to Iolanda Jordan, "our job, in short, is to help schools open in September in a safe and controlled manner, applying measures such as those that have been implemented in summer camps, with bubblegroups, the use of a masks and frequent hand washing." She also states that "in this way, it will be possible to keep infection transmission at very low levels, and to guarantee the normal functioning of the majority of schools." 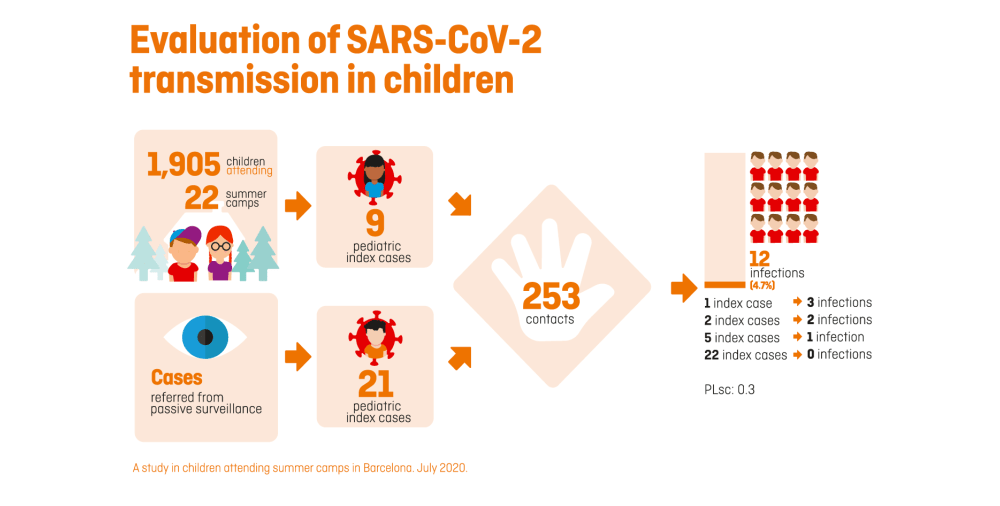 The investigators stress that this research project has a number of limitations when extrapolating its results. They emphasise that the follow-up period was very short (five weeks) and that the results come from PCR tests, but that the serological tests, which could give rise to some variation, are still pending. Contacts have also been followed up clinically to detect possible false negatives.

It should also be taken into account that most of the activities in the camps were performed outdoors with small groups, so that the results cannot be directly extrapolated to other conditions.

This is one of the largest studies to have been carried out worldwide to answer the question: how do children transmit the SARS-CoV-2 Coronavirus to other minors or to adults?